Digging Up The Past: Archaeology at the Old Quaker Meetinghouse 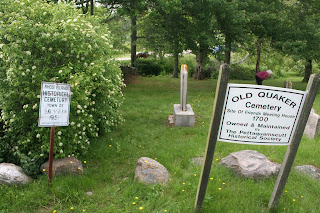 This past June archaeology students from the Anthropology Department at Rhode Island College led by Dr. Pierre Morenon, undertook a study of the site of the former South Kingstown Society of Friends Meeting House and the adjacent Quaker Burial Ground. Sandwiched a bit uncomfortably between the ramp for the Wakefield exit for Route 1 South, the Southern Rhode Island Chamber of Commerce, the property is in the custody and care of the Pettaquamscutt Historical Society. The only remaining part of the site that is visible today is South Kingstown Historical Cemetery #90, the actual Quaker burial ground; above the surface there is nothing left of the old meeting house. 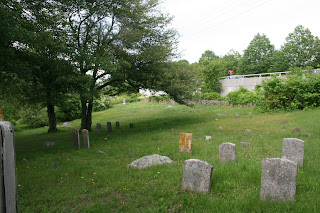 Inscriptions on graves in the burial ground next to the site of the meeting house date between 1714 to 1870. The site has a written history and provides archaeological evidence that dates back to at least the seventeenth century and likely before that. Less than a mile from here is the remains of a major Narragansett Indian town known as RI 110. While the town was likely abandoned in the wake of King Phillip's War (1675-6) if not earlier, certainly Native peoples traveled over and hunted on nearby site of the Quaker Meeting House before and after the Pettaquamscutt Purchase of 1657/8, and Narragansett people remained in the vicinity in the wake of the war. Quartz stone flakes found in the course of the June 2013 excavation by the RIC archaeologists offer clear evidence of the pre-European provenance of the site.

After the war, the settlement of Pettaquamscutt was rebuilt and English settlement of the region long-known as the "Narragansett Country" began with renewed vigor. Colonial English records indicate that in 1696, Nathaniel Niles bought a part of the Pettaquamscutt Purchase known as the “mill estate” for the sum of ₤200, which included most of the land that is today the village known as Wakefield, which has become the largest commercial center in South County. Based on the name of the purchase, apparently some kind of mill activity was already taking place along the Saugatucket River before Niles made his purchase, likely somewhere between the former textile mills on Main Street near the present day Saugatucket Bridge and Wakefield Elementary School on High Street, though no specific records of this earlier activity exists today. The Niles estate appeared in the 1703 survey of the King's Highway, which is today the Old Post Road or Scenic 1A.

Today Route 1 bypasses this compact area of Wakefield, where in the late seventeenth century and early eighteenth century, the King’s Highway wended down Sugarloaf Hill to end at the western bank of the Saugatucket River. There is no evidence there was bridge over the river at that early date, and travelers forded the usually shallow waters and picked up the road on the far bank. In 1698, about a mile away to the east of the ford Nathaniel Niles donated land for a meetinghouse for the Society of Friends. The meetinghouse was completed around 1700, and by 1710 the local Kingstown meeting was associated with local meetings in Providence, Cranston and Warwick via the monthly Quaker meeting in (East) Greenwich (see Map 1).

Beginning in 1743, the South Kingstown meeting house began hosting its own monthly meeting, and eventually came to be associated with local meetings in Richmond, Hopkinton and Westerly. The original meeting house was used by the local Society of Friends until fire destroyed the original meetinghouse for the Society of Friends in 1790; local Quakers met in the private homes of Benjamin Rodman and “Nailer Tom” Hazard until the meetinghouse was rebuilt in 1795.

In 1845, a schism emerged in the New England Society of Friends "between followers of Joseph John Gurney of England, who favored a more evangelical and pastoral route, and followers of John Wilbur of Hopkinton, R.I., who preferred a simpler unprogrammed form of worship." Despite calls for simplicity, the Quaker community had grown much larger over the course of two religious awakenings and the South Kingstown meeting became the monthly meeting site for Westerly, Richmond and Hopkinton meetings, while the number of Quaker meetings in Rhode Island had increased from 10 meetings in the early 18th century to 21 meetings by the 1830s (see Map 2).

The South Kingstown was a Wilburite meeting, and continued to meet at the same location in their rebuilt meeting house until the last quarter of the 19th century when the Quakers built a new meetinghouse about a mile away on Columbia Street and abandoned the site both for their meetings and as a burial ground.

The investigation by the RIC archaeologists sought to answer several questions about the both the meeting house to the west of the stonewall on the site and the cemetery, which lies to the east of the stone wall. The gravesites were mapped out and the distance between headstones and footstones were carefully measured. In this way, graves of children could be identified to help provide more data for infant and childhood mortality among this population, while for adults, ranges and averages for height could be determined. Test pits dug at regular intervals in the grassy area west of the stone wall located the site of the original meeting house that burned down in 1790; debris, broken window glass and 18th century nails helped identify the footprint of the Quaker hall, while further to the west quartz flakes found in the test pits suggest that Native Americans had touched up some stone tools in that same location. Another question still left to be answered is whether the stone wall was contemporaneous with the original meeting house. If it was, then test pits dug immediately to the east to the wall should be able to answer that question. If there is no debris from the fire, then the wall was there and retained the debris; if there is debris, then it is quite probable that the wall was built after the fire occurred. 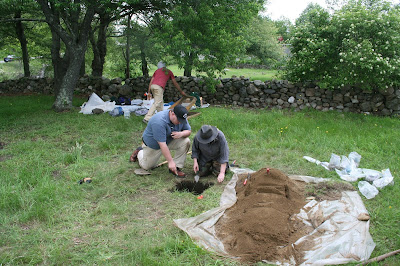 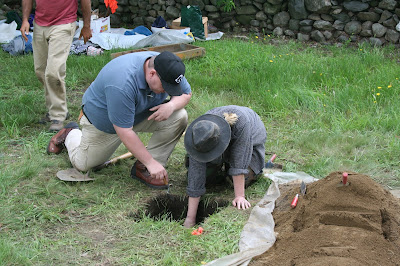 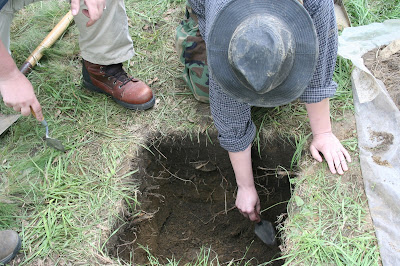 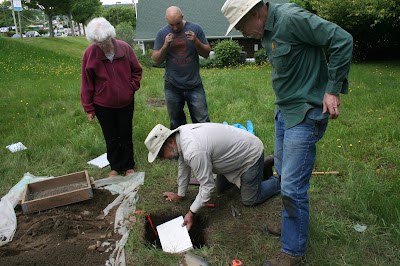 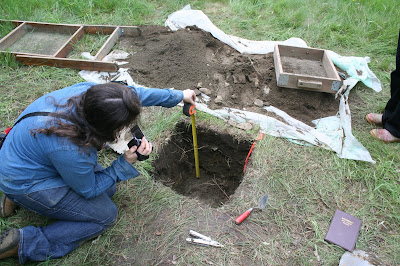 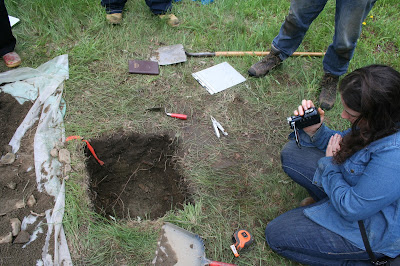 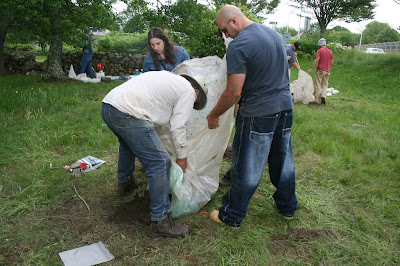 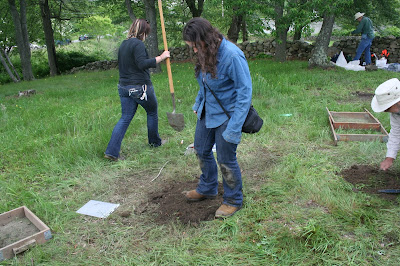 This summer and fall, the archaeologists will continue to analyze the materials collected in their lab, where I hope to visit and follow-up on this investigation. Eventually, the report of the excavation will be given to the Pettaquamscutt Historical Society, and most of the artifacts (e.g., nails, glass, and other rubble) will be reburied on the site. 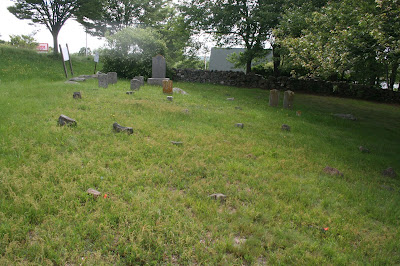 The Dead Come To Life A glimpse into what lies beneath South Kingstown's Historical Cemeteries. http://narragansett.patch.com/groups/around-town/p/the-dead-come-to-life.