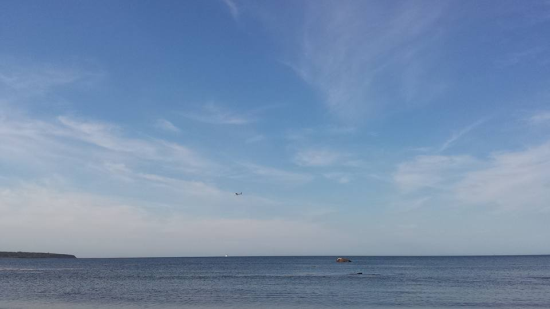 Such is the nature of a life of being a parent, a teacher, a homeowner cat owner and a fellow human -- there are not ever enough hours in the day! I have several times since my last post contemplated writing a new one but have always been distracted by...one of the above. It doesn't help that I am a bit of a perfectionist...a fellow (and far more prolific) blogger friend has suggested I just write every day and be less concerned with how perfect it may or may not be. Anyway. Time may be infinite but life is not, and being a parent, quality of life and the vortex of teaching take priority over daily blogging... 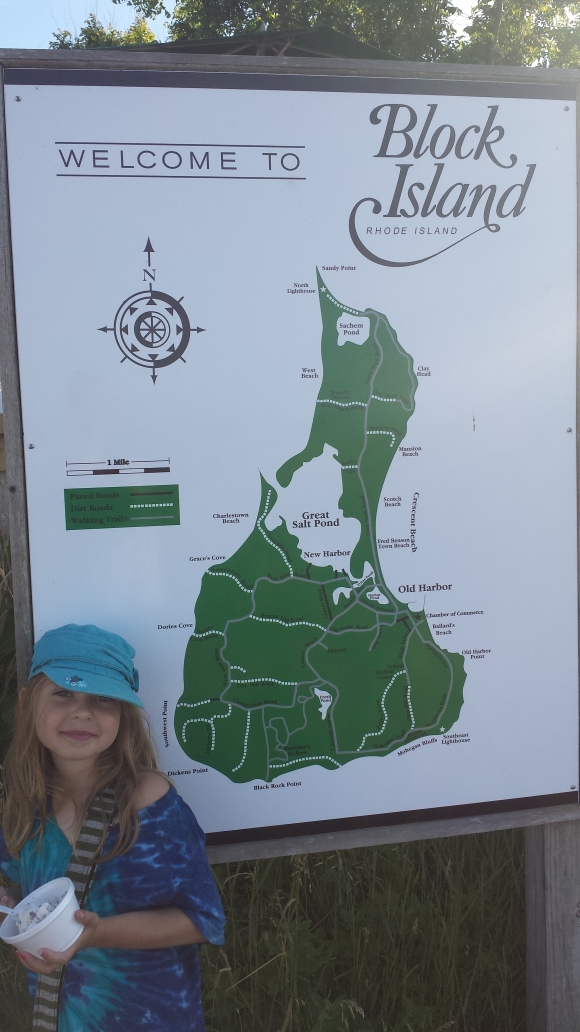 Now that I am on summer "vacation" I can get back to all the history projects that have been in various stages of limbo since -- in some cases last summer or even the summer before. Not to mention nurturing another creative outlet by dusting off the guitars, saxophones, basses and music editing/composing software on the computer. Another important summer goal is not to fall behind on Season 7 of Adventure Time and to catch up on the last two seasons of Game of Thrones and Veep. And for my inner geek, I should finish re-watching Babylon 5 and John Carpenter's Apocalypse Trilogy...

And the beach. Definitely going back to that beach. 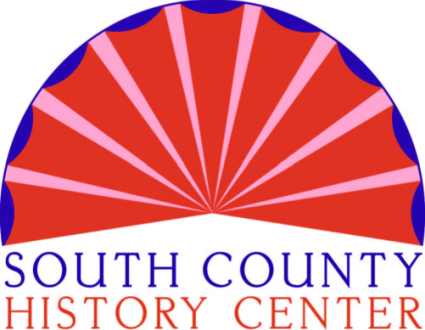 So, first some news. Congratulations to Erica Luke and the folks at the former Pettaquamscutt Historical Society for all their hard work leading up to the grand re-opening of PHS as the South County History Center! (Love the new logo btw!!) Everyone in southern New England (and Governor Raimondo's former marketing staff) should definitely check out "Cooler & Warmer: Poring Over the Drinks of Rhode Island," the Center's current exhibit (2636 Kingstown Road, Kingston, RI), in the main gallery at the Old Washington County Jail from May 21 - August 31, 2016. 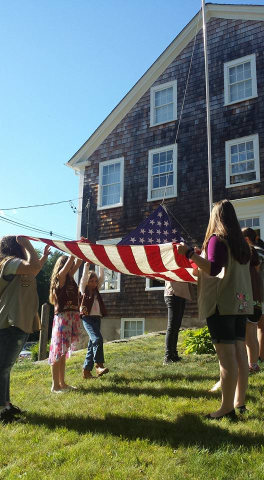 Also congratulations to the Western Rhode Island Civic Historical Society for running a great Flag Day program at the Paine House Museum on June 14 that included both the Korean War Veterans and local Girl Scouts in celebration of the 1777 US Flag Resolution. Inara completed four out five goals for her Community Merit Badge, which (after she marches in a parade) will be her tenth Brownie merit badge! 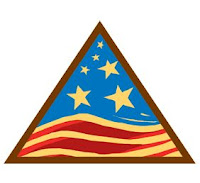 History Camp Boston on March 26, 2016 at the Harriet Tubman House was a great success -- kudos to Lee Wright for once again organizing a great day of public history in Boston. The event sold out for the third year running! 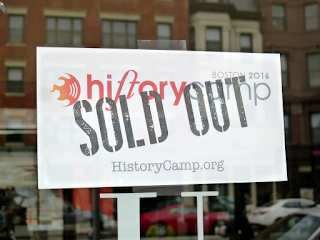 The Unconference approach is such a great format that this year History Camps are happening not just in Boston but in Des Moines, Iowa, in the Pioneer Valley in Holyoke, MA and Denver Colorado! I had a lot of fun giving one presentation on Roman Britain and another on the landscape history of Rhode Island and Connecticut over the last 500 or so years. Now that I have some "free time" lol, I need to do some minor editing and upload both sets of presentation slides to the History Camp website...

Summer reading list...I just finished Michael Wolraich's Unreasonable Men: Theodore Roosevelt and the Republican Rebels Who Created Progressive Politics for the GoodReads History Book Club -- highly recommend it to anyone looking to read something good, informative but not "heavy." Have also ordered Andrew Jackson O'Shaughnessy's The Men Who Lost America: British Leadership, the American Revolution, and the Fate of the Empire and Annette Gordon-Reed's The Hemingses of Monticello: An American Family. While waiting for Amazon to deliver those in the next couple of days, I have begun reading Riad Sattouf's graphic memoir The Arab of the Future. And I am also re-reading Thinking Like a Historian: Rethinking History Instruction, with the aim of redesigning my US History class almost entirely around Thinking Like's inquiry-based approach. Going to flip my classroom using NearPod to deliver textbook and vocabulary content and for formative assessment, and use the Thinking Like approach to guide the core work students will do in the classroom of interrogating primary and secondary sources to answer these questions: 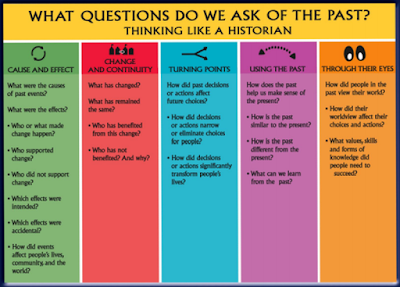 And last but not least, writing and research. I have a Model Legislature 2.0 grant to write and submit to the Rhode Island Council for the Humanities by their August 1st Civics Mini-Grant deadline. Next stage: find a video production company to help us create the training modules for our website! Louise Oliveira (my fellow statewide coordinator for the program) and I also met this past Tuesday with Lane Sparkman, the Education Director for Nellie Gorbea, the RI Secretary of State, to talk about the trials and tribulations of the Rhode Island Model Legislature program. Great meeting -- nice to know we have a secretary of state who is an avid supporter and promoter of civics education! Then I have several oral history interviews on the agenda for the WRICHS Archive, as well as the ongoing organization of the archive there. I am a good part of the way through writing an article for Christian McBurney's Online Review of Rhode Island History (smallstatebighistory.com) about the way Rhode Island courts, towns and the provincial/state government responded to outbreaks of the smallpox virus in the 17th and 18th centuries. Christian also invited me and his blog's regular writers to take part in a new project called "Presidents in Rhode Island" (fairly self-explanatory). I am interested digging into TR's speech at Newport's Naval War College and LBJ's visits to RI college campuses in the Sixties. 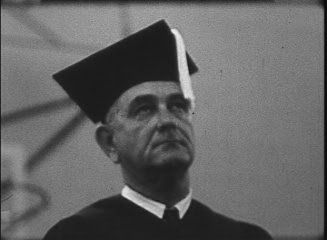 And finally, this week I was called upon by the folks at the South County History Center to answer a question regarding South Kingstown's reaction to the Tea Act in 1774. As it happens, while researching my graduate thesis I had created a digital set of town records with an old Canon A630 (God I loved that camera, may it rest in peace!), and I also transcribed many pages of those meeting records into a Word document so I could do file searches. It didn't take me long to find the information the SCHC was looking for. I didn't even have to get out off the couch! 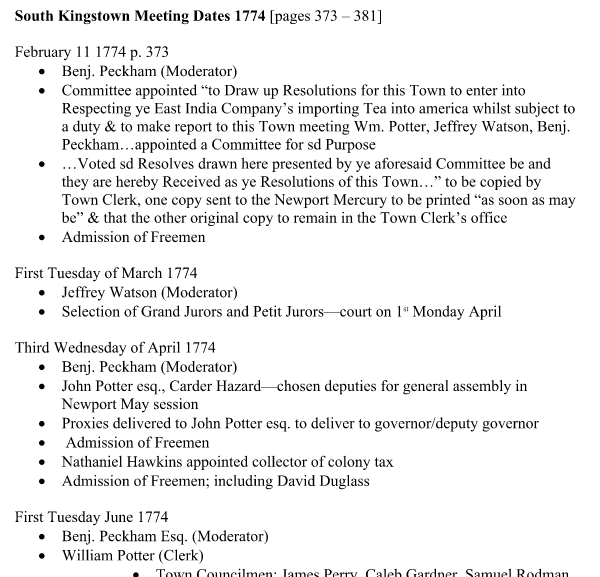 But this brief foray back into my old research has re-awoken my interest in the long-dormant journal article summarizing the findings of my MA thesis concerning the political rivalry between South Kingstown and Providence from 1760 to 1850. This was a project at the top of my "to-do" list after I finished my MA, but instead of working on that for some reason I busied myself with the next several projects on the list. I have been avoiding the thesis publication re-write I think because I was just too close to the living breathing all-consuming research-writing-defense-revision process (horror?), that I just couldn't look at it anymore. I. Just. Couldn't.

But I successfully defeated the snake five years ago this July 27...submitted my revised thesis and graduated four years ago...I think I can to go back in there now and objectively do this.