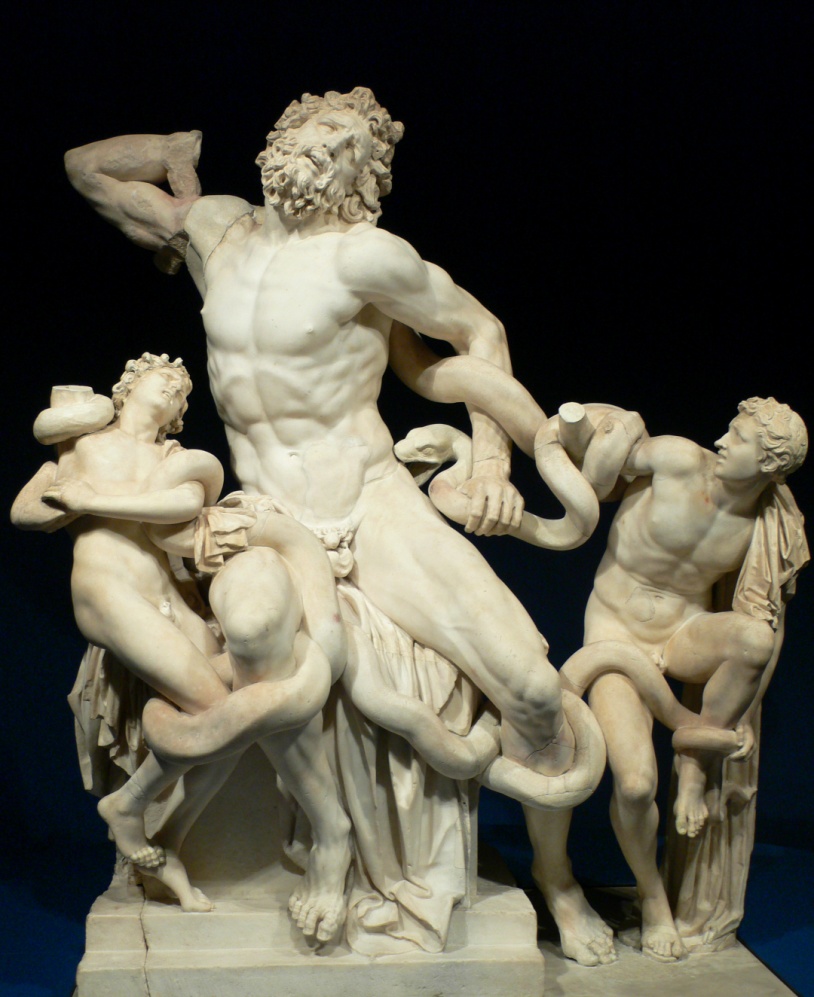 
devoted to studying ways in which 3D digital technologies can be applied to the capture, representation and interpretation of sculpture from all periods and cultures. Up to now, 3D technologies have been used in fruitful ways to represent geometrically simple artifacts such as pottery or larger-scale structures such as buildings and entire cities. With some notable exceptions, sculpture has been neglected by digital humanists. The Digital Sculpture Project will fill this gap by focusing on the following issues:

The site offers a depth of information about the classical sculpture in its "collection," such as the Laocoön statue group (arguably one of the most dynamic examples of Hellenistic Art) and a reconstruction of the lost portrait sculpture of Greek philosopher Epicurus among others. It explains the history of the art as well as the debates concerning restoration. But probably the coolest thing about the site is a 3-D rendering tool (requires Java and a software installation) to view the sculptures in the round, and quicktime movies that allow one to look at various interpretations of the sculpture in three dimensions. For instance, was the left arm extended heroically, or bent at the elbow? That is often hard to say, since most Greek and Roman sculptures are broken into pieces when discovered and they are often missing their hands, arms and heads.

No greater authority than Michelangelo entered into the argument over how to put the pieces of the Laocoön group back together. Even then the argument wasn't settled until the last bit of Laocoön's original right arm was identified as such in the 1960s and finally attached correctly...

There is also a library of articles here and entire books for perusing, on esoteric subjects such as casting and statue restoration, available for anyone seeking an in-depth learning experience into the discovery and rebuilding of classical artworks. The Digital Sculpture Project offers a virtual field trip to an Italian museum, so long as your video card is up to the task of rendering the 3-D imagery.

And what of Laocoön? He was Troy's priest of Poseidon in Homer's Iliad (or of Neptune, in Virgil's retelling) who attempted to warn the Trojans to beware of Greeks bearing gifts to absolutely do not, DO NOT! bring the wooden horse into Troy, the one left behind by Odysseus &c.

Thereupon Athena (or Apollo, depending on the version of the story) first blinded him to shut him up (didn't work--eyes gone, mouth still works). Then they had Laocoön and his two sons strangled by an enormous snake which takes him out for good (see image above).

Later that night, the Trojans may have had second thoughts about ignoring old Laocoön's advice...

According to John P. Lynch, there are significant and important differences between Homer and Virgil's retelling of the incident:


Aeneid 2 is for the most part a book of action, telling the whole story of the rapid series of events that led to Troy's final destruction. Aeneas' narrative of these events is fast-paced, almost breathless; it has the flavour and emotional intensity of an eye-witness account rather than a retelling of a past experience. But it is noteworthy that Aeneas begins the story very slowly, by recounting in detail an exchange of speeches between Laocoon and Sinon (40—198). A quick summary of Trojan reactions to the horse might have sufficed for Aeneas' purposes. Virgil's model, Demodokos' song in Homer's Odyssey, treats the debate over the Trojan horse by simply summarizing the three positions taken (Od. 8. 499—513). When Odysseus asked the bard Demodokos to sing the story of the wooden horse (487 ff.), there is no suggestion, either in the wording of Odysseus' request or in the summary of Demodokos' response, of a pivotal debate between Laocoon and Sinon; in Homer's version of the story the major debate was internal to the Trojans and took place after the wooden horse was brought into the city. Why did Virgil have Aeneas linger over the exact words of Laocoön and Sinon? What, beyond a report of causes and events, is suggested by the speeches of Laocoön and Sinon? It would seem that the personalities and oratorical styles of these two men, not just their viewpoints in debate or their roles in the story, are important for the reader to understand.

Ah, the joys of peeling back the layers of meaning in Virgil!

Then there is 3240 Laocoon, an asteroid aptly classified as a Jupiter Trojan, discovered November 7, 1978 at the Mount Palomar Observatory.

Small chance of this Laocoön striking back at his old Greek foes. Who mourns for Adonais, indeed?