A Rumely Oil Pull at a Middle-Aged Fair 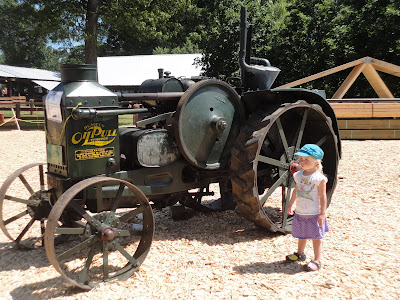 These machines are fairly rare today -- so many old tractors were sold for scrap to build Liberty Ships in the Second World War. Of the 4,855 Model L tractors built between 1924 and 1927, only 149 are known to exist today (about 3%). The story of the Rumely, like some of the other early internal-combustion engine tractors, has a storied past that dates back to before the Civil War.

That story began in 1853 when German immigrant Meinrad Rumely opened a blacksmith shop in LaPorte, Indiana. The M. & J. Rumely Company went through several phases, mergers and buyouts all the while manufacturing agricultural equipment such as threshers and separators. In 1872 Rumely built its first steam engine, and in 1886 it rolled out its first steam tractor, which burned straw as fuel. Over the next decade Rumely expanded its line of steam traction machines, and in 1909 it tested its first kerosene-powered tractor, the "Kerosene Annie" under the direction of Meinrad's grandson, Edward A. Rumely, who wrote that year:

MAN made his first step toward civilization when he took a crooked stick and began to till the soil, using first the force of his own muscles. Later he learned to apply the power of the animal to the work. Upon cultivating the soil, he became master of the plants and shaped them to serve his purposes. With the plow the savage life of the hunter and the nomad life of the herder gave way to that settled agriculture that now yields our food supply and upon which rests our modern civilization.

Strangely enough, this work of plowing with which man began his systematic labor remains today still his severest toil. For man, as well as animals on the farm, the dusty and monotonous work of plowing is the hardest drudgery. Think of the power required to pull a plow only the distance across the room, and then of the eight miles of furrow travel in every acre of land. To plow a square mile one man and two or three horses must walk 5,200 miles each. It is easier and the distance less to walk around the earth at the equator than to follow a plow turning a tract of five square miles. To plow three townships the plowman must walk as far as from the earth to the moon and back again and sixty thousand miles farther. Ten horse power hours are needed to turn an acre of land, and to plow one half the area of the United States nine billion four hundred and fifty-four million seven hundred and thirty-six thousand (9,454,736,000) horse power hours are required...
--Edward A. Rumely, Toiling and tilling the soil, a 1909 Rumely oil-pull tractor sales brochure

The early steam and kerosene tractors (circa 1870-1920) were very large machines. Only the wealthiest farmers could afford them, and often a single steam tractor would be used to do work on a number of farms in its vicinity. But in the 1920s Rumely (and a number of other tractor manufacturers, such as Ford) redesigned some of its machines and made them smaller and lighter, like the Model L pictured here. These tractors were designed and priced to replace the single team of horses found on a small farm. The University of Nebraska Tractor Test reported that in the Model L drawbar horsepower test the Model L generated around 18 to 19 HP.

These Model L Oil Pulls were some of the last tractors made by Rumely. Better designs from their competitors and the Great Depression unfortunately conspired against the Advance-Rumely Company, as the company was known by then, and it was bought out by Allis-Chalmers in 1931. [Thanks to David Parfitt and Chris and Rod Epping for a refresher on Rumely's history]

Any of these old tractors are a favorite at steam and antique tractor shows. We were fortunate enough to see this one running later in the day, though we missed it being started up, which is always an adventure to watch. One of the fascinating things about all these old machines is the low RPM of the engine, which idle at less than 200 rpm.

Few people today would even know how to start one of these tractors--the "key" would certainly never fit in your pocket, though it would have been near impossible to misplace!
Starting a Rumely

Some start these tractors by simply grabbing or the flywheel or pushing on it with their feet and giving it a good spin. Don't try this at home folks.
Starting a Rumely II

No power-steering on these either.
Larger "Prairie" machines

Ever wonder why the flywheels were left exposed? Before the days of the PTO (power take-off), the pulleys powered belt-driven threshers, saw mills, and other machinery.
Threshing Demonstration

The North Stonington Fair, always held in the second week of July, is a particular favorite because it is the first major fair of the season -- the next major Connecticut fair will not be until the end of August. The North Stonington Fair holds its antique tractor pull on Sunday starting around noon (the pull for newer models and modified tractors is on Thursday, the first night of the fair). Though the Rumely didn't compete (metal-wheeled tractors aren't allowed), there were a number of pre-1955 John Deeres, Olivers, Farmalls, Allis-Chalmers, Fords and even a Canadian Cockshutt (see below) pulling several times their weight in cement blocks. In the end, a pull of only a few inches decided the winner. 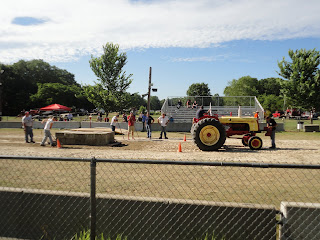 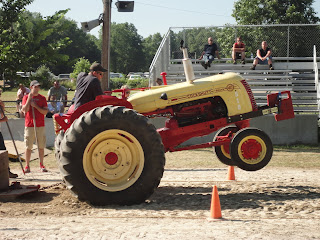 The fair itself is not among the older fairs in Connecticut; the 2011 fair was the 47th edition, putting this particular fair squarely in so-called middle age.