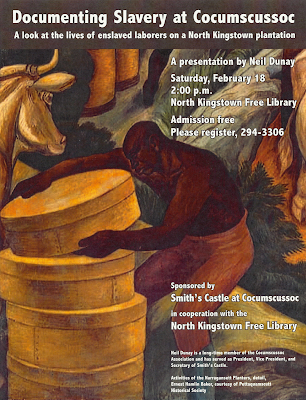 "From the late 17th century to the early 19th century, Cocumscussoc (Smith’s Castle) was a large plantation spanning thousands of acres that depended upon slave labor to produce and ship goods and to serve the household. Biographical material about the enslaved people at these sites is scant. Neil Dunay, a past president of Smith’s Castle, will provide a preliminary overview of the information about slaves at Cocumscussoc gleaned from historical records.

This presentation forms the basis for a grant proposal to find additional information to provide a more informed picture of the lives of enslaved and indentured laborers at Cocumscussoc, as well as of the Smith/Updike family's roles in the institution of slavery."


I found out about Neil Dunay's presentation after I had stopped by Smith's Castle on a whim a couple of Saturday's ago. I had been sent to pick up some tax paperwork in North Kingstown for the Prius we bought last year and I was heading down Route 1 South to the URI library in South Kingstown to pick up some books. As I came up on Smith's Castle I suddenly decided to take a minute and pull in. I am in the early stages of researching a journal article about Connecticut and Rhode Island's "war of officials," part of their struggle from 1663 into the early 1700s over the jurisdiction of Narragansett Country -- better known to most Rhode Islanders today as South County. I have some questions about the destruction of the trading post in the spring of 1677, and if anyone could answer them, it would be the folks at the trading post itself.

There usually isn't anyone at Smith's Castle this time of the year, but I was fortunate -- Norma LaSalle and Neil Dunay were both there, doing a little late winter cleanup and supervising some folks doing community service. Neil and I sat down for a bit and talked about the region in the 17th century and the contest over jurisdiction between the two colonies. Neil and Norma were also kind enough to also front to me on credit a copy of the Association's recent publication, Smith's Castle at Cocumscussoc: Four Centuries of Rhode Island History, which is absolutely filled with the sort of details that will liven up my eventual journal article.

Before I left I also grabbed a couple of flyers for Neil's upcoming talk "Documenting Slavery at Cocumscussoc," and I promised Neil I would be in attendance. The flyers themselves were striking -- the background is an excerpt from Earnest Hamlin Baker's mural Activities of the Narragansett Planters, which from the Depression was on display in the Wakefield Post Office and is now housed at the Pettaquamscutt Historical.

Dunay's research has teased the scant details of the lives of the slaves that lived at Cocumscussoc largely from documents ostensibly created for and by the plantation's white owners and occupants. He also makes key geographic connections between colonial Wickford, New York City and the Barbados. While some of the principle characters in the story had interactions with slaves going back into the 1630s (including Gysbert Opdyck's murder of his black servant in 1639), the history of slavery at Smith's Castle began in earnest in the aftermath of King Phillip's War, when captured Narragansetts and other Native Americans were "exported" from the trading post and sold into slavery in the West Indies. Upon Richard Smith Jr. death in 1692, his probate listed eight black servants as part of his estate. At this point the plantation passed to the Updike family, relatives of Richard Smith Sr. who had been living at Cocumscussoc from about 1664. Through family connections in Barbados the Updikes came to acquire a number of slaves; by 1757 the plantation's slave population had increased to eighteen. Compared with southern plantations, eighteen is not large number of slaves, but for Rhode Island's Narragansett Planters it placed them among the largest slaveholders in the region.

The institution of slavery at Smith's Castle began to decline from this high point in 1757. Like most of the large landholdings of the Narragansett planters, with each successive generation the plantations were divided into smaller and smaller farms, as Rhode Island lacked a western frontier that had enabled Southern planters to simply send most of their excess progeny to farm their frontier lands. Eventually by the 1770s the division of lands in the Narragansett Country reached the point where most planters could no longer support the kind of large-scale commercial agriculture that required the labor of numerous slaves. By the census of 1774 the number of slaves at Smith's Castle fell to eleven. During the Revolutionary War some of the plantation's slaves took advantage of Rhode Island's manumission for enlistment in the 1st Rhode Island Regiment in 1778. In the years following the war, the General Assembly passed a system of gradual emancipation, and by 1800 only two slaves remained. State law forced the owners of slaves too old or infirm to support themselves to be maintained in their households of their masters, rather than see them go onto the town's poor rolls.

Perhaps the best aspect of this presentation was its digital format -- the visuals and text of the presentation were on a Prezi slide show, which can be accessed on the Prezi site (Documenting Slavery at Cocumscussoc). For anyone not familiar with Prezi, presentations in this format allows one to shift from images of primary source documents, maps, and art that in a way far superior to a PowerPoint presentation. Images and text can be "buried" inside other images; the effect is like a visual counterpart to the old-fashioned text outline. While the slide show is missing Neil Dunay's expert narrative to tie it all together, much of the experience of attending the presentation yesterday is preserved there for all posterity, which to me is another reason to be excited about the digital revolution taking place in the documenting of history today!