Tonight Christian McBurney gave a lecture at the illustrious John Brown House Museum on the subject of what is commonly called "The Battle of Rhode Island." In December 1776, the British invaded Narragansett Bay and occupied the city of Newport, and stayed until 1779. McBurney has written what is likely to be regarded as the definitive modern interpretation of the events of that occupation and the joint efforts of the French and the American patriots to liberate Newport. 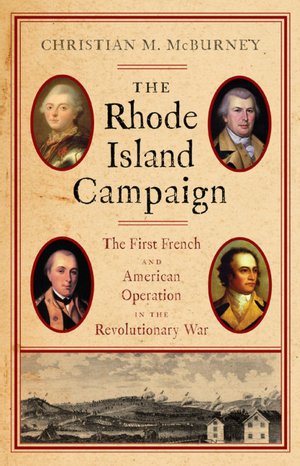 Though not as well attended as McBurney's lecture several years ago that accompanied his book on Kingston (A History of Kingston, R.I.,1700-1900, The Heart of Rural South County, 2004), it should have been better attended. This lecture was more informative and authoritative and far less "antiquarian" than his lecture (and most recent tome -- McBurney has written two) on Kingston. If only I had the money to plunk down for a copy of his new book tonight, but alas! all my cash had gone to renewing my RIHS membership, which was lapsed and which I had been meaning to renew for some time now. I will try to get to his upcoming lecture next month in Bristol on the British attack there and get a copy of it then.

After the lecture, I spent a few minutes talking to Mr. McBurney about the Tories who fled from the Narragansett Country to Newport during the British occupation. South Kingstown town records are mute on this subject, and the town's committee of safety left no records at all of their activities, let alone who might have been "invited" to leave or who left on their own volition. The most specific information I have come across in my research on the subject was in a letter from General Nathaniel Greene to Rhode Island governor Nicholas Cooke. Greene mentioned that perhaps as many as thirty planters had fled from the Narragansett Country to Newport with their slaves. My theory is that a combination of push-pull factors sent the local Tories hauling off to Newport--some were pulled by their loyalty to the Crown and disdain for the new order of things, while others were likely routed out by the local committee of safety. While there is no specific evidence to support this, I suspect the so-called "land pirates" who had accompanied the British on their 1779 Spring raids on South Kingstown, men like John Gorton, were exacting a bit of revenge on the community upon their brief sojourns into town and, if they could lead the British to them, even on the very revolutionaries that had forced them into exile.

During our brief discusion Mr. McBurney indicated that there is information about this heretofore uninvestigated group of Rhode Islanders. He suggested that more Tories fled from North Kingstown and even Exeter rather than from South Kingstown, and that this -- Rhode Islanders who joined the British cause in the Revolutionary War -- will be the focus of his next book. I am very much looking forward to such a study. If the same level of scholarship goes into a study of Rhode Island Tories as The Rhode Island Campaign, Christian McBurney's next book will be very welcome indeed.
Posted by Mark Gardner at 10:11 PM