"I Am Providence" - Reflecting on the Legacy of H.P. Lovecraft (or lack thereof)

Phillip Eil's feature on H.P Lovecraft this week in the Providence Phoenix poses the question -- are Rhode Islanders finally ready to recognize Providence-born H.P. Lovecraft's legacy as a horror writing hero? Given Lovecraft's contribution to the genres of science fiction and horror, his affinity for New England in general and Providence in particular, it's odd that Providence (a city which since the 1990s prides itself for its attention to culture and the arts) has done...not much in promoting itself as Lovecraft's hometown. Eil's article points out that beyond Lovecraft's grave site (right) and a plaque at the John Hay Museum (quoted below), there are no other memorials to Lovecraft anywhere in Providence. Edgar Allen Poe, Walt Whitman, Jack Kerouac, even Robert E. Howard and Zane Grey are among the long list of literary figures that have museums or houses devoted to their memory. It is time to establish a similar historical institution devoted to H.P. Lovecraft. I argue that if such a museum were to be founded anywhere on Earth (other than beyond a nameless mountain range in Antarctica), it should be in Providence, Rhode Island.

The dearth of a official plaudits is not for lack of local enthusiasm for Lovecraft. Donovan Loucks, who operates the extensive (and award-winning) website, The H.P. Lovecraft Archive, has identified all the relevant Lovecraftian sites in Providence and a walking tour designed to take aficionados to see them.

For a few years local fans also ran the aptly named NecronomiCon, but it fizzled when the organizers apparently burned out after running the Lovecraft memorial every odd-numbered year from 1993 through 2001. Lovecraft's birthday is still celebrated annually with visits to the Ladd Observatory and graveside readings by Lovecraft stalwarts.

I never can be tied to raw, new things,
For I first saw the light in an old town,
Where from my window huddled roofs sloped down
To a quaint harbour rich with visionings. Lovecraft clearly loved the old colonial architecture of Providence's East Side, aptly described here in a poem that was otherwise an ode to fungus on a gigantic trans-Neptunian world. At right is the house on Angell Street in Providence where Howard Phillips Lovecraft was born in 1890 (image from The H.P. Lovecraft Archive). What a beautiful old Victorian house! Unfortunately it was torn down in 1961 -- it would have been perfect for a Lovecraft museum . Luckily there are many other locations with a "Lovecraft" connection in Providence. It is time for a concerted effort to establish a an H.P. Lovecraft museum or house in Providence, preferably somewhere connected to his life or his writing, if that is possible. I think there is sufficient interest to support a Lovecraft museum from the "sci-fi and horror communities" and knowledgeable tourists looking for something interesting to see while in Providence. Given the current state of the real estate market, there will never be a better time to move forward with such a project.

I also think that along with celebrating the originality, the brilliant eccentricity of Lovecraft's writing, that the numerous criticisms leveled at him should be part of the exhibit as well. While some might argue against celebrating the work of someone who was clearly as racist as Lovecraft, presenting Lovecraft's less savory aspects in the context of his times should be part and parcel of the exhibit. America at the time of Lovecraft's writings was easily as racist as he was, nor was antisemitism confined only to Nazi Germany. Attitudes toward the aboriginal peoples around the world (with the exception of anthropologists and a few enlightened missionaries) mirrored Lovecraft's label of "savages." These aspects of his writings and personal beliefs are just as important to providing a complete picture of Lovecraft and early 20th century America, just as the inclusion of Sally Hemings at Monticello is vital to the understanding of Thomas Jefferson and the late 18th century. Lovecraft's foibles provide a "teachable moment" for those visitors who come because they wanted to visit the museum for the author of the "Cthulhu Mythos," but when they would leave they would have an increased understanding of what America was like 75 to 100 years ago, and how far it has come since then.

That others find his writing sophomoric should not inhibit our efforts to establish a serious institution devoted to Lovecraft either -- haters gonna hate. Even as Lovecraft biographer L. Sprague de Camp described Lovecraft's prose as "turgid, verbose, and overwritten," it was a far more charitable assessment than what Colin Wilson and other critics had to say of Lovecraft's stylings of the otherworldly. But despite numerous naysayers, H.P. Lovecraft has had an indisputable impact on modern media and popular culture -- from the movie Alien to Stephen King and Clive Barker to Metallica and even French philosophers -- promoting Lovecraft as a favorite son can only have a positive multiplier affect on the cultural cachet of the capital city.

In a state where some residents were half-serious when they proposed that the Big Blue Bug represent the Rhode Island on the state's quarter, it's time for Howard Phillips Lovecraft to take his rightful place as a literary icon of the state.

But the stream of Time, swift flowing,
Brings the torment of half-knowing --
Dimly rushing, blindly going
Past the never-trodden lea...

Lest we fall into despair at the horror of our past... 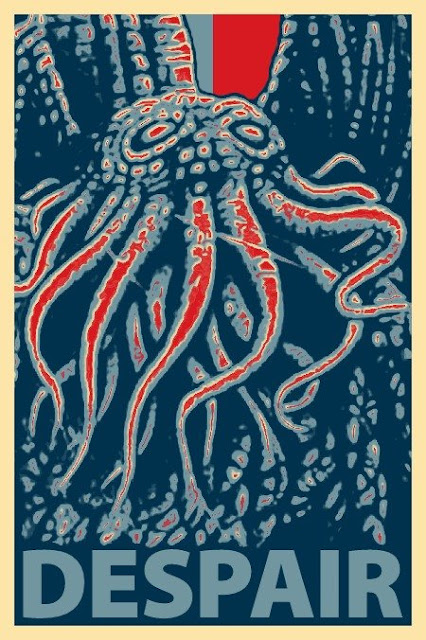 (image of a not-so-invisible whistling octopus after all from cryhavoc.org)
Posted by Mark Gardner at 8:00 PM