The past several weeks have been incredibly busy -- so much so I have not had the time to finish the several articles I have begun for this blog, which are all currently in various stages of incompletion. The end of the school year, always a busy time, has become increasingly backloaded with testing and portfolio assignments. Along with the usual end-of-year work at work I have also been busy with several work-related initiatives, from successfully meeting the objectives established for my evaluation this year under the new state mandated system to participating in the state panel that met last Monday June 4 at Rhode Island College to expand the History GSEs (Grade Span Expectations) to include geography, economics, and culture. The group I worked with completed a draft for grade 9-12 geography. (All those years of teaching middle school geography finally paid off!) This summer, if the state can find PD funding for us, we'll reconvene to work on the economics and culture GSEs. The underlying theme of

all that work was of course the Common Core -- we used language from the Common Core History/Social Studies Standards where ever possible so we won't be re-writing the GSEs again in a couple of years when the Common Core hits... I also have a "brainstorming" session to revitalize the Rhode Island Model Legislature program coming up in about a week. Myself, state coordinator Joe O'Neil and a number of the other high school advisors will look into how we can return Model Legislature to its former greatness. The Pettaquamscutt Historical Society is holding its annual meeting on June 20--this past Friday the Pettaquamscutt hosted

Lindsay Leard-Coolidge's most informative lecture "A Sense of Place: The Painters of Matunuck, 1873 to 1941" at the Hale House, about the impressionist painters colony established by William Weeden and E. E. Hale in late 19th century Matunuck. This was also the first time I have been inside the Hale House since the Pettaquamscutt Historical Society renovated and opened the house to the public.

Finally, the Western Rhode Island Civic Historical Society June meeting is coming up June 26--which reminds me! I have some phone calls to make and information to put together before that meeting...a future blog post on the details of our summer's work there is in the pipeline too.

I also graduated on May 17 with my masters degree

in history -- I found it somewhat odd I was the only Rhode Island College MA history student to graduate in either the August 2011, January 2012, or May 2012 semesters -- when I first started there were at least dozen students pursuing the thesis-optioned MA in history. Talking with my thesis advisor Dr. Ron Dufour this past spring, he prophesied that the History MA degree at RIC would likely be phased out in the next few years... I wonder too what effect the proposed replacement of both the Board of Governors for Higher Education and the the Board of Regents for Elementary and Secondary Education with an 11-member k-20+ Board of Education is going to have on ALL public education in Rhode Island.

On a lighter note, I walked into a CPT meeting last week and discovered the History Department got a delicious cake last week to celebrate my graduation and another department member's successful acquisition of the guidance position she has been working toward for about as long as I've been working in my thesis. Cake is good! 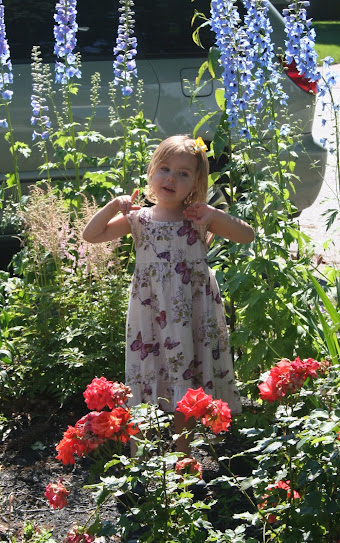 The kids have been very busy with softball, swim and dance, which means Tara and I have been busy since none of the people can drive themselves yet to any of these activities. But this is the last week at work -- major course assessments for seniors finished last week and underclass exams are this week. Light at the end of the tunnel! Next week, Inara will turn 4, on the same day that the 2011-2012 school year will come to an end. Huzzah!

Everyone has been working hard on the garden. Tara has done much of the work this year, and it's entirely to her credit the garden is doing very well. We still need to plant some hill vegetables and tomatoes and maybe some peppers if we can find room. The legumes and lettuces are all starting to come up. We are also doing two farm shares this summer (I feel a juice fast coming on soon!) Just this past weekend we located several sources of locally-produced chicken and beef, which I intend to write more about in a future blog post.

Finally, in what I interpret as a good omen for the yard and garden this summer, yesterday morning we discovered an eastern box turtle sunning itself on the front step. The turtle became very curious of me sitting in his (or her?) vicinity and tried to crawl up -- first my shoe, then the steps -- to get a closer look at me. Kitty Man then became very curious of the turtle, but Tara shooed Mr. Man off before any possibility of a Cat vs Turtle war tournament could break out in the herb garden...and at that point the turtle took leave and very quickly hustled off. 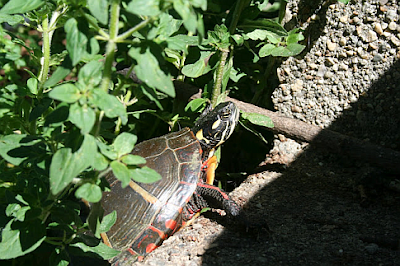