Boston has always been first and foremost among New England cities. Her one-time colonial rivals: Newport, Portsmouth, New London, and Norwich are comparatively inconsequential today. Occupying secondary status beneath Boston and above small

municipalities and the larger towns, are Springfield and Worcester, Massachusetts; Manchester, New Hampshire; Providence, Rhode Island; and Bridgeport, Hartford and New Haven, Connecticut. Historian Bruce C. Daniels (New England Nation, The Connecticut Town: Growth and Development, 1635-1790, and Dissent and Conformity on Narragansett Bay: The Colonial Rhode Island Town) argues that they “represent the long-range success stories of New England’s urban history: of the nearly 1000 towns founded in the colonial period, they (along with Boston, of course) were the ones to grow and become major entrepôts in the twentieth century, while others grew relatively less, grew and declined, or did not grow at all.”

Worcester is a poster child for central place theory. There is little else in its history to

suggest it would ever become an important city. Deserted twice and utterly destroyed once before 1713, by 1790 Worcester was a typical farming community. But it did have two factors in its favor: first, it was centrally located between Providence, Boston, Hartford and Springfield, and it also lay on the “country road to Connecticut.” Geography lent crucial commercial value to Worcester’s property. Also, its central location in Worcester County made it the judicial center and county seat of the region. Court days were accompanied both a holiday atmosphere and the presence of men of significant wealth 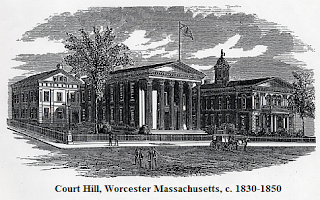 and power, important community boosters that would contribute to the eventual rise of Worcester. The startling changes in Worcester's courthouse from 1732, when it was a simple Georgian-style single story to the 1830s, when it had become a sprawling Greek Revival compound, speaks volumes about the changing fortunes of the community.

Settled in 1636 as an outpost of Connecticut, Springfield, Massachusetts got off to an earlier and far more ambitious start than Worcester. The success of Springfield resides

with founder William Pynchon, whose vision turned a fur trading post into the economic powerhouse of western Massachusetts. The decline of the fur trade in the 1650’s did little to slow its growth, as mills, mines, factories, ironworks, were all in operation soon after the town was founded. But an early rise did not guarantee Springfield long-term supremacy over the Connecticut River Valley. Springfield faced internal division typical of many New England settlements. The town split into two parishes in 1704, and by the Revolution four new towns formed from outlying districts (the bounds of the original town actually encompassed all or part of what are today Westfield, Southwick, West Springfield, Wilbraham, Ludlow, and Longmeadow in Massachusetts, and Enfield, Somers, and Suffield in Connecticut). By 1790 Springfield’s population was less than that of either West Springfield or Northampton, an ambitious town twenty miles to the north on the Connecticut River. While one of these centers would likely come to dominate the upper Connecticut River Valley, it was not clear that center would necessarily be Springfield.

Unlike Springfield, both New Haven and Hartford always dominated their respective areas. Even after the colony of New Haven was absorbed into Connecticut, both communities retained political clout as co-capitals and the seat of their respective counties. New Haven had been founded by a group of wealthy merchants for the express purpose of establishing a commercial center, while Hartford’s Puritan ministers and merchants enjoyed a central location among Connecticut’s founding settlements. New Haven’s harbor and Hartford’s location on the Connecticut River were the keys to their commercial growth. Both were incorporated as cities at the same time in 1784, and by 1790 both had become bustling, urbane communities. 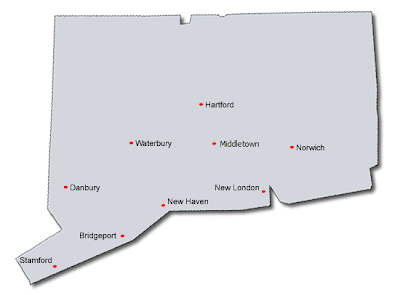 Several other Connecticut towns experienced rapid growth. Middletown, Norwich, and New London had all caught up with New Haven and Hartford by Washington’s first inauguration. But no one could have forecast the future importance of Bridgeport, which did not then go by name Bridgeport, or even legally exist until 1821. But the farmers of “Poquonnock” had considered themselves a separate entity from neighboring Stratford and Fairfield as far back as the 1650’s. The road to their eventual independence began when Poquonnock was incorporated as an independent ecclesiastical society in 1694 and changed its name to Fairfield Village. Over the next century, the community underwent several more changes in name and political status. In 1790 Newfield, Connecticut had a population 3000; its village center provided a tavern and home to number of part-time artisans’ shops. More important to the eventual rise to urban status, the community’s outstanding deep-water harbor, a resource that went unnoticed during the colonial period, was only dimly grasped for the first time during the Revolutionary War. It is unlikely anyone would have ever predicted this Connecticut hamlet would outshine every other major Connecticut center its rapid economic development. 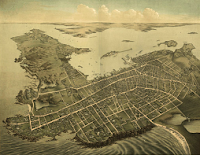 In Rhode Island, Providence played second fiddle to Newport throughout the colonial period. Twenty miles closer to the Atlantic trade routes than Providence, Newport’s real rival was Puritan Boston; and the combination of location on the southern tip of Aquidneck Island and its religious tolerance gave Newport a significant edge over both Boston and Providence (see image left, Library of Congress. Call Number G3774.N4A3 1878 .G3.) As long as the overland road system in Rhode Island remained undeveloped, settlers preferred rowing or sailing to Newport for their goods than traveling overland to Providence. However, by the 1790s, Providence was poised to surpass Newport, whose fortunes crashed when the British occupied and destroyed it during the Revolutionary War. Providence was a far more secure port during the war, and the improvement of overland roads convinced merchants even before the war broke out, particularly the Brown family, which of the two cities to invest their fortunes. When the rest of Rhode Island balked at ratifying the Constitution, Providence threatened to secede from the state to access the economic stability promised by the new national government. By 1790, Providence had a bank, an impressive array of shops, the only college in Rhode Island (Brown University) and had developed its own commercial contacts reaching all corners of the globe. When Providence extended a series of turnpikes across western Rhode Island and into the unserviced hinterlands of Connecticut and Massachusetts (see map, below), the entrepôt became the central place for large swaths of all three states. All roads lead To Providence

In New Hampshire, the odds-on favorite would have been Portsmouth as the most likely to succeed (see photo, left). The only relevant port north of Boston, by 1790 it had over 6000 residents, a vibrant merchant community and shipbuilding industry, and was both the first settlement in New Hampshire as well as its capital. Instead, the vision of Samuel Blodgett would lead an insignificant village called Derryfield (with a population of only 362 in 1790) to surpass Portsmouth as the primary central place in New Hampshire. Blodgett, described by one neighbor as “demented old man bent on squandering money that would profit no one.” Yet Blodgett imagined that Derryfield could become “the Manchester of America” if only a canal were built around the nearby Merrimack River rapids, rendering the river navigable to shipping. Upon Blodgett’s death in 1807, Derryfield was still just a small village on a costly canal. Yet Blodgett’s farsightedness eventually brought economic prosperity and urban prominence to his once skeptical neighbors, who in due course changed the community’s name to Manchester, as he had suggested.

All seven of these cities had geographical advantages that aided their development, but so did many other communities that never grew into major urban centers. Political forces and early settlement are two other important factors yet they are also not the sole determinant, as Bridgeport and Manchester had neither distinction. Natural and man-made transportation systems also played a significant role in the rise and fall of New England's central places. Individual initiative was another key to the success of all these communities -- exceptional individuals like Moses Brown, William Pynchon or Samuel Blodgett, group efforts by the Puritan merchants that founded New Haven and Hartford played key roles as well. However, of all the key characteristics of successful cities, this might be the most impossible to quantify of all, only serving to remind us it is the very unpredictability of the human venture that makes history such a fascinating business. Bruce Daniels reminds us that while “urban development between 1790 and the twentieth century seems smooth and organic, the inevitable quality of this evolution is a trick played on us by the arrogance of hindsight.”

NB: A version of this article also appears in the August 2012 Hinterlander, the monthly newsletter of the Western Rhode Island Civic Historical Society