After recommending to the board of the Western Rhode Island Civic Historical Society that we should establish both a work space to process the manuscript collection, and a place 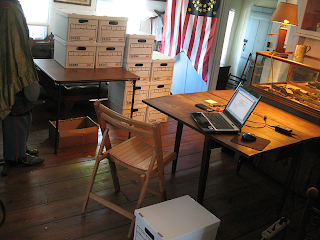 for the public to be able to sit down, access and use the collection, I am happy to report that my recommendations were accepted and work has begun to create such a space.

One of the problems I began to run into this past fall was that the work space I was utilizing was only temporary (see photo left). I was setting up in the "military room" (so-called because of the civil war uniforms, swords, and other military memorabilia on display) which was open to public tours. I could not simply leave folding tables and chairs in the middle of the room with whatever papers and manuscripts I might be processing laying about. 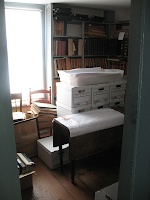 So there was a set-up and break-down process every time I came to work on the collection of about 30-40 minutes in toto. This meant that if I had a free hour where I could go work on the collection, most of that time would be spent simply carrying everything out of the library room, then putting it all back into storage a few minutes later (see photo right).

My recommendation to the September 2012 board meeting was to convert the military room to a work space that would be closed to the public, but that idea was voted down because closing it off would interrupt the flow of traffic on museum tours, which is circular and does not require visitors to retrace their path through rooms they have already visited. It was then suggested to me that part of the "music room" (so-called because of the nineteenth-century musical instruments and players on display, such as this Edison music player, below) be turned 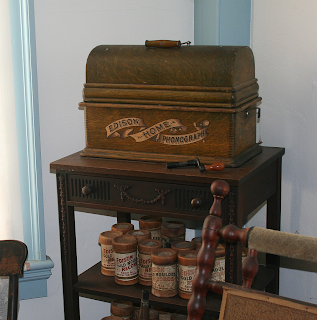 over for a permanent work-space that would not have to be broken down every time I worked on the archive. One issue I realized as I considered that plan was the lack of light control -- the room's windows face south and west and the space receives direct sunlight for the afternoon hours; at the least new blinds and lighting would have to be purchased and installed. That could get expensive.

As I began to think more about the future of this project and not just my immediate needs in processing the collection, I realized that the Society should also have a place where the public can come in, sit down, and use the collection. This public access area should provide for some supervision of public usage -- a desk where someone from the WRICHS can comfortably watch people using the collection to ensure its safe handling and security, but also be where an archivist can work, answer questions, pull records out of storage and return them. I went back to the board with the suggestion that the military room be re-purposed into a work-space that would remain open to public tours; guides would simply inform visitors not to disturb the work in progress. Then the room would be re-purposed again into a public access space once the work on cataloging and arranging was complete. 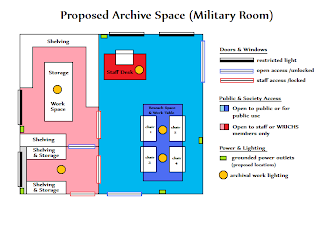 The other advantage is that the windows in the military room face north, so direct sunlight is not an issue. I went back to the board with my ideas and a floor plan schematic (right).

The response was that the military room would be too small a space; that the public reading table/work space would take up too much room and it would be a cramped area for people to work in or tour through. This a valid point (see the first photo above). But providing public access to the collection is fundamental to the mission of the Society, and therefore it was decided that the music room should be entirely re-purposed into a permanent work-space now, that will become the public access room later. With light-blocking window shades, sunlight can be controlled and artificial lighting installed that would not damage the collection. I drew up a new floor plan (below), which has become the blueprint for what is now the WRICHS Archive Cataloging, Conservation and Public Access Project, and the board pledged funds for the project that hopefully can be matched by philanthropic grants. The essential plan is to catalog and arrange the collection in 2013 and 2014, with a tentative opening of the archive to the public sometime in the summer of 2014. 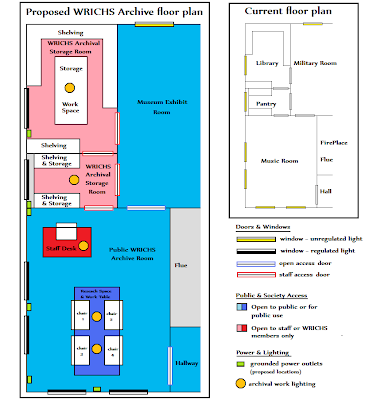 On December 28, 2012 several WRICHS members met to begin moving the "music room" collection and making an archival work space. We were joined by Andrew Boisvert, Archivist of the Old Colony Historical Society in Taunton, Massachusetts, who wanted to photograph us working on the project for a book he is putting together about public history in the area, Below are photographs of the music room before we began relocating the furnishings and musical collection. 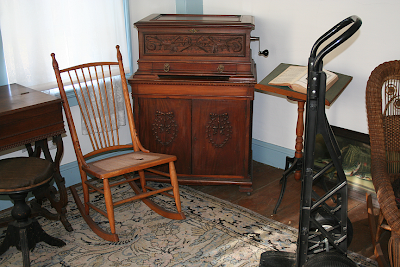 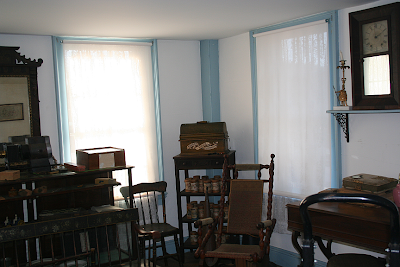 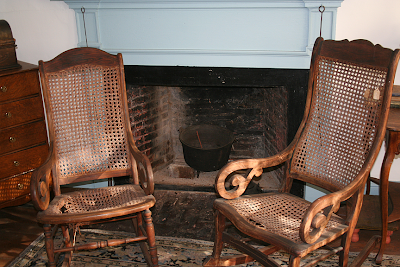 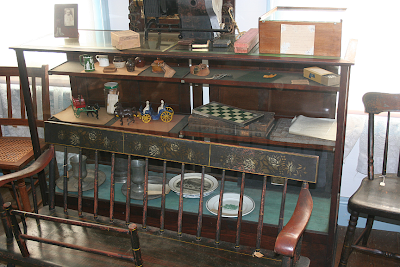 Below is the room later that day, re-purposed for the archive. The case that is currently exhibiting old children's games (above) is slated to be used to display interesting parts of the WRICHS archive collection. I am looking forward to arranging the first archival exhibit in time for the 28th Annual Preservation Works on Saturday, April 27, 2013. This is a statewide historic preservation conference sponsored by Rhode Island Historical Preservation & Heritage Commission (aka Preservation RI) that this year is focused on the Pawtuxet River Valley and West Warwick, RI (which, as Rhode Island's youngest town, is celebrating its 100th birthday this year). One of the locations conference-goers will visit is the Paine House Museum -- this conference will be the first time that the new archival floor plan will be used by the public. I have also created a website for the archive that will be eventually placed under the westernrihistory.org domain, and a WRICHS Archive twitter account that has already started attracting a following. 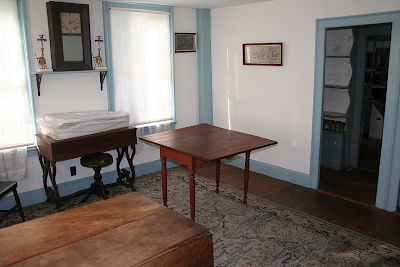 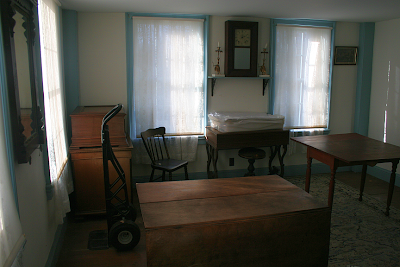 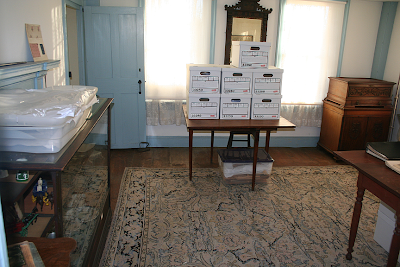 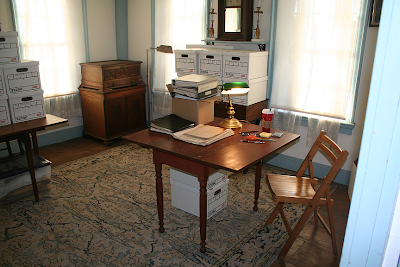 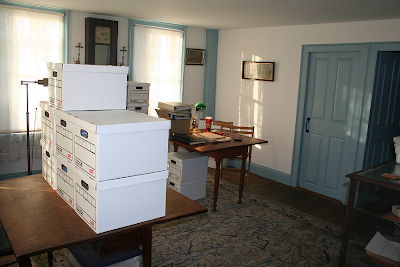 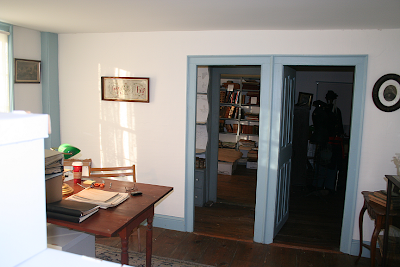 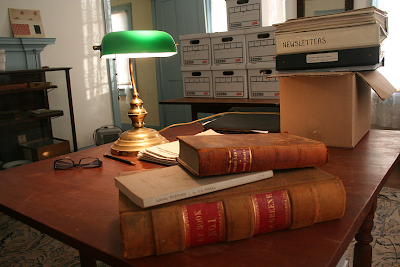 The other work being done on the archive is as equally important if more prosaic; securing donations and funds for light control, archival-quality storage and a computerized cataloging system. I have discovered that JC Penney has blackout roller shades that should block the rays of the sun, and they are only $10 apiece -- definitely in our price range. Currently I am using my personal laptop and Excel spreadsheets to record the catalog, but I downloaded the freeware version of the Museum Archive Software to check it out. It looks like it would work well for us, the premium edition upgrade is eminently affordable at $24.95, and so far everyone I have talked to that has used it says that it is a great little program. Computer software engineer extraordinaire James Pansarasa is donating a computer system to us, and I have applied for an ADDD Media Project Grant from the Rhode Island Foundation to help us purchase acid-free folders and boxes. At the moment we are using relatively inexpensive bankers boxes and folders purchased from Staples, which are better nothing but aren't of archival quality, and there are still parts of the collection that aren't yet stored at all. Even so, when I look back on this past year at what we have done for this collection, I am so pleased to see that it is in a much better state now, and on track to become a viable historical resource for researchers, genealogists, and the general public.
Posted by Mark Gardner at 8:00 PM